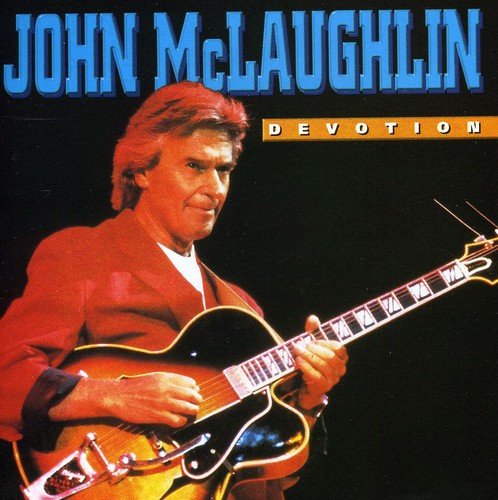 This is McLaughlin's deepest exploration of electric guitar tone. There isn't much of the insanely fast picking or jagged rhythms he's known for. Instead you get to hear John dissect and reconnect amplified sounds into brilliant, scary patterns. But as wild as the sounds get, he's always in control, following a lucid direction.

One of my all time favorite albums finally available again!!Not remotely like the Mahavishnu music (no knock, but very much about virtuosity), this stuff is Visceral, Scary, Psychedelic mutant blues/jazz guitar playing at its most primal. Not subtle, but beautiful nonetheless.

The title should indicate that this is an early 70's retrospective; the cover photo even shows McLaughlin at a much later date. I was disappointed that a.) This contained selections I already had; and b.) they were not among the very best of that era anyway.However, this is not a bad choice if one wants to simply collect some more from this great guitarist.

For me this album is a happy accident. I actually bought the vinyl when it was originally released. I was blown away by what seemed like a whole new direction in guitar. Later I learned that the final tracks, as released, were very different from the raw recording and first mix. Best to quote Walter Kolosky, a writer who knows more about McLaughlin's musical history than virtually anyone alive except McLaughlin himself. (McLaughlin kindly gave me a copy of Kolosky's brilliant Mahavishnu history at a concert not long ago.)"As mad as guitarist John McLaughlin was that his album Devotion was botched in the editing process while he was away, there is no denying that four decades later it remains one of the great guitar grunge records of all time. It is said that the master tapes were damaged and cut up so badly that the reassembled parts never matched the actual planned songs. Part of McLaughlin's disdain for the result was also probably related to the fact that producer Alan Douglas paid McLaughlin a grand total of $2,000 for both Devotion and his follow-up record My Goal's Beyond. Now that was a bargain for Douglas! But considering how often those albums have been re-released over the years, McLaughlin is entitled to his regrets. That's a lot of cash going into someone else's pockets for your hard labor.We'll never know if the outrageous guitar solo that begins "Purpose of When" was actually supposed to be at the beginning, but it's a great place to start. It is an angry and sometimes dissonant cry. Billy Rich's marching bassline and Buddy Mile's backbeat accompany McLaughlin's wailing. Organist Larry Young has his B-3 tuned to some alternate pitch to provide even more friction. McLaughlin's lines are distorted and dark. They are brutally loud if you can stand to turn the volume up to where it is supposed to be. "Purpose of When" is not a masterpiece of composition. (Maybe it was part of one before the editing snafu.) Instead, it is a detached statement of blues-influenced rage that comes from the angriest part of the primal instinct. You can't get much grungier than that."

This, along with "Inner Worlds" is probably the most picked apart & derided release by John McLaughlin. I've enjoyed this album a long time for what it is, despite it's flaws (poor production & remastering). There really weren't too many guitarists doing what John McLaughlin was doing on here back in '69. Larry Coryell is the only other guitarist who comes to mind. I don't count Jimi Hendrix, Eric Clapton, Jeff Beck, etc. because what they were doing at the time was strictly blues based rock. No jazz or jazz based ideas involved. This album isn't perfect, but includes some of THE MOST driving playing by John McLaughlin in his long career (the title song, "Marbles"). Also, this album succeeded where the much talked about wah-wah drenched solo album by Fleetwood Mac founder (& my favorite guitarist) Peter Green's "The End Of The Game" failed the very same year. I never tire of "Devotion", but I can't listen to "The End Of The Game". It is unlistenable. Anyway, if you can get past the poor production & remaster job & enjoy John McLaughlin's guitar work you will enjoy this. This is the closest John McLaughlin came to rock music though (the album includes Buddy Miles on drums & Billy Rich on bass who were both associated with Jimi Hendrix). Some jazz guitar fans may not enjoy it. Alan Douglass was behind this & also some weak Hendrix compilations (anyone remember "Crash Landing", "Midnight Lightning", & "Nine To The Universe"?). They were also poorly produced. Poor production seemed to accompany everything Alan Douglass was involved with. For those who can get past this album's flaws it is worth owning & very good early John McLaughlin a la his playing on Miles Davis' "A Tribute To Jack Johnson" album. John McLaughlin never made anything that sounds like "Devotion" ever again. The Mahavishnu Orchestra were loud, & played fast, intricate music. This is not like that at all. "Devotion" is a moment in time where John McLaughlin was moving in the direction that resulted in "The Inner Mounting Flame" & alot of what followed it. The ONLY reason this doesn't get five stars is the poor production & remastering job. The music itself gets more than five stars. Enjoy to those who give this a try.