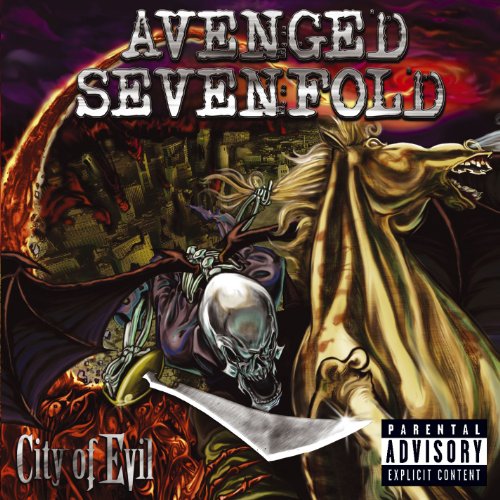 Shattering preconceptions of punk and metal, Avenged Sevenfold blazes a bold new path with its debut major label album, City of Evil. Fusing punk with melody, metal intensity with an adventurous spirit, the drama and darkness of AX7 moves effortlessly from his powerful vocal punch to thick cascading melodies, from loud and fast to epic. Influenced by everyone from Pantera, Metallica and Iron Maiden to Bad Religion, Misfits, Guns 'N Roses, prog-metal and experimental rock, Avenged Sevenfold seeks its own musical vengeance with City of Evil.

I will never forget when this album hit. After the mid nineties, and even the great Pantera had fallen in popularity, there were a lot of pushes to get metal going again. There was a good serge of Nu Metal, which I was never a fan of, that lead into the metalcore seen of the early 2000's. While I do love some of those acts, most never really caught on with mainstream audiences. A7X was one of those bands. At that time, I hadn't really seen the genius of Waking the Fallen, and it seemed like an screamo band that was more interested in their female fans that actually making a metal album (It has taken time to appreciate the complex Maiden with punk influence structure of that album) but this one really broke open metal to the masses. This is the best A7X album, and while they have only gotten bigger since this album's release, this is the one that they will be remembered for until and if they can top it.There are a lot of criticisms that this album is too much of a departure from their previous albums, which may be somewhat true, but I will say that it is for good reasons. I have heard a lot of emo and AFI comparisons for this album and how the band isn't metal, and while I might agree with their subsequent self titled album being more rock, the guitar parts on here alone qualify this as a very technical metal album, just one that the uninitiated can listen to and appreciate. I understand that to the purists that this almost seems like sacrament, but that type of thinking alienates the rest of society. I know that it is a hard thing to do, to look inward at the community that we love and to realize that while integrity and all the great things that metal stands for, being completely alone isn't one of them. There was a time when this whole country loved metal and had integrity. Making music that only a few people understand isn't helping anyone. Trying to say that one thing qualifies as metal because of how hard core it is reduces music to numbers and not how it makes you feel, and A7X managed to make a metal album that was fun. This is what brought guitar parts back into metal beyond just double base drums and base guitar. I have heard the criticism that Shadow's voice sounds a little whiney here, but not any more so than old GNR. This is the album that most kids today see as metal, and I don't think that is a bad thing. For an old timer that has been listening to the genre for his whole life, it is really cool to have things chaged up from time to time.

This album is a true masterpiece, it's also the album that really put the A7X name out there. This was the first album of theirs that I heard when I started listening to them years ago... I absolutely love this album and every other one they've put out, before and after this one. Avenged Sevenfold foREVer!

I will not start speaking of Avenged Sevenfold otherwise I will need a website on its own. For the non-metal and rock fans, listen to the classics and drama behind the screaming. If you only hear screaming, heavy metal and rock, you don't have a music ear. The singer Matthew Sanders (M. Shadows) has an amazing talent reaching highs and lows with a strong scream-like voice with no miss whatsoever even live. Thank you A7X for switching me from the Madonnas, Trances, EDMs, and Club Music, to only YOU. Love you, your style, your voices, the talents of the guitarists syncing with the drummer, and the hard work behind each and every song. I hear their Hail to the King new album being released on Tuesday the 27th of August 2013 and it is already pre-ordered. This latest album is inspired by the group gathering and listening to classical music from Bach, Mozart and others, and trying to understand what makes these classical composers so great. And they understood, wrote and produced songs that are nothing but their own style but with a greater classical and drama sense only a music ear can hear. DADT; dgaf

It is, no doubt, a healthy sign when a departure is made from a tradition that has become a mere convention through observance, but it remains to be seen whether success can be attained by so abrupt a change from the established vogue as is exhibited in A7X's "City of Evil" album. My only previous experience with this group is seeing the videos of "Bat Country" and "Seize the Day" (which seem to be constantly on the Fuse network), so I was somewhat apprehensive about buying this album. Much to my delight, this album is so drastically different (hitherto all I could listen to was Offspring) and it proves that modern rock can be more than screaming and deafening noise.Rather than give a rundown of all the songs, I'd rather say just a few things. The songs run a lot longer than anything else I'm used to hearing. Shadow's lyrics are quite poetic and metaphorical, and are certainly thorough-composed. However, I felt there was a lot of musical sameness from one song to the next (the majority of the songs are hovering around D minor). The range of styles shows a level of musical sophistication that one would be hard pressed to find in other hardcore albums today. While I enjoyed it very much on the first listen, I can't say that other listeners who are used to death metal won't be turned off from this album. I do think it is a fine album and does not deserve as much crap as it has been given.

Great addition to my a7x collection. Can't go without it. I love this band. Unfortunately I didn't find them until last year, but they are the best thing out there. This album is nice because it was recorded back when they had the Rev and it's so great to hear them all together. This band has and will continue to stand the test of time

Bought this for a teenage son. He truly loves it. I also enjoyed a few of the tracks on the CD. It was worth it. Can play it in the vehicle and also on his game system.