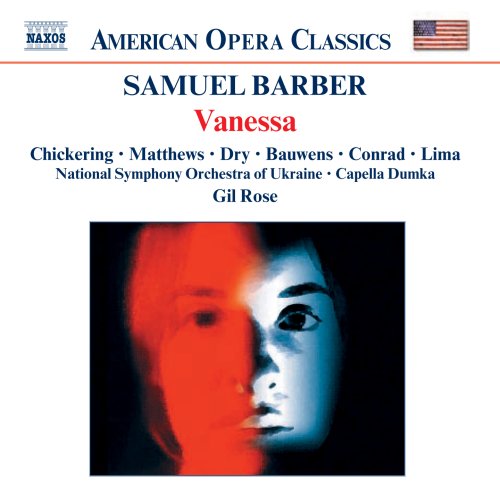 Samuel Barber was almost 48 years old when his first opera, Vanessa, was produced by the Metropolitan Opera Company on 23rd January, 1958. Received with much acclaim, the opera went on to win the 1958 Pulitzer Prize for music. The libretto, written by the composers life-long friend Gian Carlo Menotti, tells of the love triangle between the heroine Vanessa, her niece Erika and the son of her former married lover Anatol. This tense, tragic scenario is fully reflected in Barbers music, with incredible passion and intensity throughout.

This recording might be better appreciated if you've never heard the original with Steber,Elias,Gedda and Tozzi. Those singers on the old recording were all major opera stars who connected with their roles and listeners. The vocal balance is further back on the new recording giving more prominence to the excellent Ukraine Orchestra. The orchestral passages are played beautifully. Ellen Chickering has some good moments as Vanessa even if she occasionally sounds like she's singing Salome or Elektra. Richard Conrad is an old tenor pushing his voice down to sing the bass role of the Doctor which was so beautifully sung by Tozzi before. Ray Bauwens sings Anatol with an unattractive though strong voice. Andrea Matthews' Erika is a little on the wobbly side. Still, its nice to have a new recording of this fine opera even if it doesn't feature any great voices.

I've been on pins and needles ever since I learned that there was going to be a new recording of Samuel Barber's 'Vanessa,' an opera I've loved for forty years. It was presented at the Met, conducted by Dimitri Mitropoulos, with Eleaner Steber (Vanessa), Rosalind Elias (Erika), Nicolai Gedda (Anatol), Giorgio Tozzi (The Old Doctor), Regina Resnik (The Baroness). The opera won the Pulitzer Prize for music in 1958 and the Met cast was recorded soon after the première. I've owned first the LP, then the CD of that recording. I've attended three different productions of the opera, served as sub-repetiteur for a local production, helping singers to polish their roles. It is my second-most favorite American opera (after 'Porgy and Bess', and if one doesn't consider 'Sweeney Todd' to be an opera). When I got this recording I began listening, score in hand, and have now listened to it three times through, with multiple repeats of certain spots. I've also listened again to the Met recording. As I write this I am listening for the umpteenth time to that incredibly lovely and moving final quintet that starts, 'To leave, to break, to find, to keep, to stay, to wait, to hope, to dream, to weep and remember.' I always have a frisson at this and other spots in the score.The opera has been disparaged by some who find it old-fashioned and melodramatic. It is those things, to some extent, but it is impeccably crafted both musically and dramatically. It is one of the operas, like 'La Bohème,' whose dramatic arc is such that each time one reaches the final moments one is moved emotionally. There is not a single moment of boredom in the piece because everything moves inexorably to that final scene. And the music! How can I explain? Memorable passages come one after the other. It's almost impossible to pick high points, in fact. From the opening scene where Erika is ordering dinner ('Potage crème aux perles') to her aria 'Must the winter come so soon' (surely one of the loveliest of all mezzo arias) to the scene where Anatol arrives (Vanessa's 'Do not utter a word') in the first act there is not a false move. (And I love the tiny orchestral reference to a theme from 'Boris Godunov' when Anatol refers laughingly to himself as the 'false Dmitri.') As a physician myself, I have always identified with The Old Doctor, love his ditty 'Under the Willow Tree' and am ruefully amused by his confession, 'I have always known I am a bad doctor.'But enough about all that. What of this performance? It is quite good, not quite up to the original cast performance, but it has quite a few merits of its own. The cast, all virtual unknowns to the larger musical community, are mostly from Boston, and indeed this recording, although made in Ukraine with the National Symphony Orchestra of Ukraine, under Boston conductor Gil Rose (founder of a remarkable new group there called the Boston Modern Orchestra Project whose earlier CD of music by George Rochberg I heartily recommended). Every principal singer is quite good: Ellen Chickering as Vanessa, Andrea Matthews as Erika, Marion Dry as The Old Baroness, Ray Bauwens as Anatol, and Richard Conrad as The Old Doctor. There are a few unsettled moments for each of them, but overall the music is very well served and the drama put across with admirable skill. Indeed, although there is an English libretto supplied--thank you, Naxos!--the cast's diction is such that it is hardly necessary. And if you've listened to much opera in English you know that this is high praise.The enclosed booklet is well-done, with excellent notes by Richard Conrad who, besides singing The Old Doctor, is the founder and artistic director of the Boston Academy of Music as well as director of the Bostonian Opera whose production (except for the Ukrainian orchestra) this is.The recorded sound is clear, warm, spacious.I could write more but I think I'll stop and go back to listen once more to the Anatol/Vanessa duet in Act II, 'Love has a bitter core, Vanessa/Anatol.'Heartily recommended.TT=111 minsScott Morrison

Source: Studio recording made in Ukraine, based on a successful live production in Boston.Text: Composer's second version. Some numbers have been cut out and the original four acts have been revised into three.Sound: Contemporary DDD standard.Documentation: Essay on the opera and its history. Track listings. Complete revised libretto in English.After more than forty years, this is the perfectly respectable second complete recording of a 20th Century opera more worthy of performance than its spotty record of production might indicate. While the members of the new cast do not match the luminaries who appeared in the first recording, Eleanor Steber, Rosalind Elias, Regina Resnik, Nicolai Gedda and Giorgio Tozzi, they are pretty good, the women being rather better than the men. The orchestra sounds perfectly at home in what must for them have been quite exotic material.The story is a Gothic bon-bon written by Gian Carlo Menotti, inspired by Isaak Dinesan.Long-ago jilted by her lover, Vanessa has withdrawn into her isolated house, which she shares with her dragon of a mother and her much younger niece. All the mirrors in the house are covered in an attempt to hold back time until the return of the reprobate lover. Vanessa learns that he is returning at last. She is excited by the prospect of life opening up for her once again. The reprobate enters, but to Vanessa's shock, he is not her old lover but his son, Reprobate Jr., a penniless scamp with a taste for the high life. He sizes up Vanessa and her balance sheet, then tells her that he can love her. Vanessa departs in distress, leaving the niece behind to attend to the wants of the guest. Between Acts I and II, Vanessa accepts the young man, the covers come off the mirrors, the dragon-mother thaws out, and the household re-enters the social swirl. Also, with the aid of Reprobate Jr., the niece has become pregnant. During a house party, the niece decides to renounce any claim on the young man in order to assure Vanessa's happiness. In the last act, Vanessa prepares to depart the country-side with her young man to take up married life in the city. The niece bids them farewell. Now mistress of the household, the niece orders that the covers be replaced on the mirrors. With the re-frozen dragon at her side, the niece will hold back time until her lover (Reprobate III?) returns.As opera plots go, this one is not much sillier than that of "Il trovatore" and almost as serviceable.The musical style of "Vanessa" has been described as American verismo. At the time of its composition, it was regarded as a bit old-fashioned. Would that it were more so, for amid its mid-20th Century aridities are many passages of surprising and old-fashioned lushness.This very inexpensive set is a fine recording in its own right. It is also an excellent and accessible introduction to 20th Century opera in the post-Puccini/post-Strauss mode.